OH HAI GUYZ!
I know it's been a little while, but thus is life!
SO. Remember that Ruffley Bedspread  I made about 2 years ago?
WELL....
It has a new life! Since I made a new duvet last summer, the first one has been hibernating in a storage bin ever since. We recently splurged for some new gray towels at HomeGoods, and I wanted to replace our shower curtain as well, but Kyle and I are also trying to save money to buy a house. That means when I get the redecorating itch for non-essentials, I gotta use what I already have! 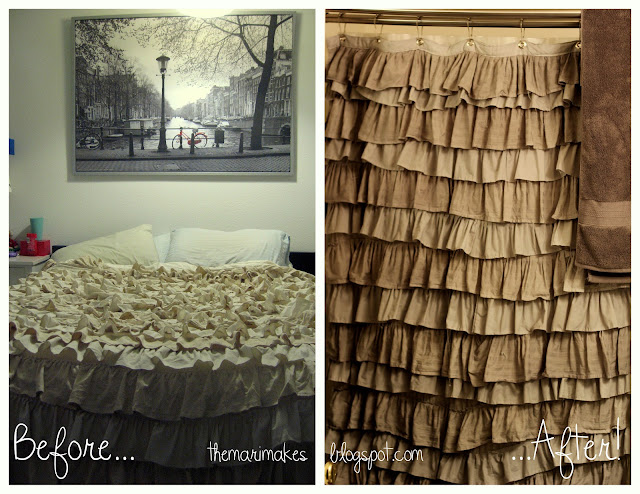 I trimmed the spread down to size using the original shower curtain, and sewed a reinforced strip across the top.Then I installed some grommets from Michael's and dyed it gray with a few boxes of RIT Pearl Grey dye I already had on hand. I used 2 packs of grommets for a total of about $6. Supa cheap and snazzy re-do!
It's not perfect, but it's enough of an update that my need to redecorate the bathroom is satiated!
Thanks for reading!!
Posted by Mari at 8:35 PM

I love to hear from you! Please keep comments on topic and respectful!